Yellow scarves waved and children’s voices echoed through the Capitol rotunda during the School Choice Rally in Frankfort, Jan. 27. Held inside this year, the event still drew a sizeable crowd, with older students taking to the balcony with rally signs.

Students, teachers, parents and others behind the cause advocated for school choice and scholarship tax credits.
Scholarship tax credits would give businesses and individuals a dollar-for-dollar tax credit when they contribute to a qualified scholarship granting association. Schools then dispense those scholarships to families who otherwise couldn’t afford to choose a private or parochial school for their children.

Speakers at the rally included State Senator Ralph Alvarado, Attorney General Daniel Cameron and a panel of parents who shared testimonies of the significant impact of school choice.

“The lack of means to move or go to private school (shows a) discrepancy between rich and poor…” he said. “We need to give our kids the opportunity to compete nationally with their peers.”

Three mothers also gave testimonies to the impact of scholarships on their children.

Citing experience with poverty and unfortunate circumstance, they argued that zip code should not result in a lack of opportunity. “Finances shouldn’t determine the first 15 years of childhood education,” one said. Each advocated for an option to choose what is best for their children. 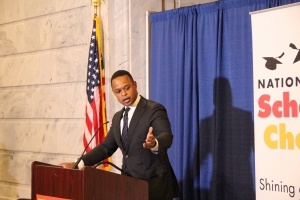 Attorney General Cameron, recently elected in 2019, agreed that choice is at stake.

“Regardless of background, beliefs, wealth or race, Kentucky children should have access to an education that meets their needs,” he said. “All types of schools and learning environments are necessary to meet the unique needs of every child… public schools, parochial schools, private schools…”

He recognized the role of Representative John “Bam” Carney in championing the scholarship tax credit movement, but who recently fell ill and so has not been able to bring a bill to the floor.

Mr. Cameron accepted get-well cards from the students for the representative.

Students from Holy Cross School, Covington, ended the rally with a School Choice Week dance, which they performed for everyone present.

Andrew Vandiver, associate director, Catholic Conference of Kentucky, also attended, and was pleased with the turnout and the lineup of speakers. EdChoice Kentucky organized the rally.

“I think more than anything it’s hearing from parents, because parents and students is what this is all about,” he said. “We had students from all across the state present.

He also referenced Attorney General Cameron’s presence as significant to the cause. Mr. Cameron is the highest profile speaker they’ve had, and “We’re excited to see how in his first month of being in office he’s already behind this issue.”

“School choice is very important for our school because we have a lot of families that have a variety of socioeconomic needs and we’re trying to meet them the best that we can,” said Ms. Gardner. “When we heard that there was going to be legislation going to push this forward, we wanted to be part of it.”

Ms. Gardner said she was touched by the poignant stories of the parents whose families have suffered from a lack of school choice.

“I hope this is among the years of successful stories. Hopefully it’s not the end of a great story,” she said.

To stay informed on House Bill 350, follow the link: https://www.votervoice.net/CCKY/Home; to contact your state representative to show your support call 1-800-372-7181.

Bishop Foys, cathedral to be featured segment in ‘The Chair’ se...

In Washington, Bishop, priests and pilgrims are the voice for the voiceless...
Scroll to top