Blog - Latest News
You are here: Home1 / Featured Stories2 / Christmas Mass in the Diocese of Covington

The Solemnity of the Nativity of the Lord Jesus is celebrated Dec. 25, 2020. Due to COVID-19 restrictions, Mass capacity will be limited this year, so the Diocese of Covington encourages the faithful to plan ahead accordingly to find a time that will fit for their families.

Please see below for a full list of Mass times throughout the diocese.

Like it does in all things, the Church uses Christmas Masses to tell the story of salvation. Different Masses emphasize varying aspects of the Christmas story, and together they communicate the message of the Messiah coming to save the world.

The Vigil Mass, celebrated early Saturday evening, is distinct from the three Christmas liturgies. Many families enjoy going to this Mass to kick off Christmas festivities, but the Church in her liturgies is just getting started. The Gospel is the beginning of the Gospel of Matthew, the genealogy of Jesus. It sets the scene because the focus of this Mass is the humble beginnings of Christ’s life on earth.

Next up, Midnight Mass usually begins somewhere between 9 p.m. and midnight on Christmas Eve. Since Midnight is traditionally celebrated as the hour Christ was born, the Gospel is Luke 2 — the traditional narrative of Jesus’ birth. This Mass carries a theme of deep night, and is officially considered the first Mass of Dec. 25 rather than a vigil. It’s sometimes called the “Angel’s Mass” because of the “good news” carried to the world, and the Responsorial Psalm bears the angels’ words: “Today is born our Savior, Christ the Lord.”

On Christmas morning, the Mass at Dawn celebrates Christ as the Light of the world breaking over the darkness like the sun breaks over the sky. Mass at Dawn ought to be celebrated early, sometime around the dawn — otherwise, it can be classified as the third Christmas Mass, Mass During the Day. The Gospel for the Mass at Dawn is the narrative of the arrival of the shepherds at the birth of Christ, and thus it’s called the “Shepherd’s Mass.” The theme of light continues through the Responsorial Psalm: “A light will shine on us this day: the Lord is born for us.”

Finally, the Mass During the Day, usually celebrated some time after 9 or 10 a.m., communicates the message that the Son of God has now been revealed to the world in the full light of day. Sometimes called the “King’s Mass,” it rejoices in the coming of Christ for the whole world, just as the three kings, or Magi, received him as Gentiles rather than Jews. This begins the evangelization of the whole world rather than the singular focus of the Old Testament on the Jews alone. The Gospel for this Mass is the beginning of the Gospel of John, tying in the larger framework and implications of Jesus’ birth, known and planned by God from the beginning for the salvation of his people. 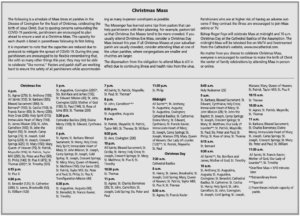