“We pull out all the stops at Christmas,” said LeeAnn Kordenbrock, the cathedral soloist. Pun intended or not, she will be standing next to the organ during Midnight Mass. “If we don’t have as many personnel, that doesn’t mean we won’t make it as beautiful as we possibly can.”

Ms. Kordenbrock and Dr. Gregory Schaffer, basilica principal organist and choirmaster, have been providing nearly all of the music at the Cathedral Basilica of the Assumption, Covington, since the public celebration of Mass resumed May 21 in the Diocese of Covington after the COVID-19 shutdown. As Christmas approaches, they reflected on the challenges of the year as church musicians.

“I think it was the weekend of March 15 when Father had to pull the plug on music,” said Dr. Schaffer. “We had (Cathedral Bishop’s Choir) rehearsal that Wednesday, and by Friday evening, all the music was cancelled. … It was totally unexpected, but by the weekend, I think none of us were that surprised because things were developing on a daily basis around the entire country.” 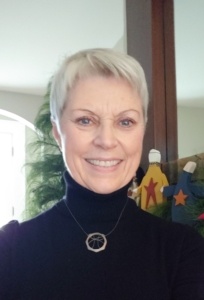 Music resumed when public celebration of Mass did, but everything had to look different. Since many of the choir members were at higher risk of catching COVID-10, Dr. Schaffer didn’t feel comfortable approaching any of them to solicit help, due to the risk factor. He also knew that many had signed on because of the group experience. That’s when Ms. Kordenbrock volunteered to solo.

“Greg and I talked, and I offered to do whatever anybody needed,” she said. She has since become a staple, along with Dr. Schaffer, for weekly Cathedral Masses. A few other singers have helped out along the way as well.

When public Mass resumed with the provision that the congregation could not sing, due to the threat of droplets spreading the virus, Dr. Schaffer had to restructure his entire Mass plan. “You have to approach it with a completely different set of variables. Every detail of what we do for the liturgy had to be re-thought, re-processed, and to an extent tested out. With one voice singing, you can’t play full organ like you would with the congregation singing along with a hymn. It’s been quite a learning curve.”

As far as the music they choose, Ms. Kordenbrock said it takes a lot more effort and planning on a weekly basis, “but it’s not quite as paralyzing as it was when the first quarantine statement was made.” They have developed a much simpler repertoire for the soloist arrangement.

While they’ve always tried to include a variety of styles in the Cathedral due to the variety in Mass-goers — parishioners and visitors alike — Dr. Schaffer and Ms. Kordenbrock have tried out some new styles this year. They’ve adopted the Mass propers, antiphons which are a more traditional method of music in the liturgy, and are commonly replaced by hymns. They are sung at the procession, the offertory, communion and the recession. This was, in part, due to a concern that the congregation would feel left out.

“At first I was concerned about doing very familiar hymns with just a cantor and organ, that might be perceived as teasing the congregation,” said Dr. Schaffer. “Not that it would be intentional, but still the idea that ‘I know this hymn and I want to sing it and I can’t.’ It’s frustrating.”

Beside the propers, they also started using familiar texts with unfamiliar melodies so that there might be some meaning in the music, particular to that day or celebration, “without perhaps scratching at a scab of someone who wants to be singing,” said Dr. Schaffer.

“Sometimes when we sing tunes that we’ve sung forever and ever and we know the words… sometimes the meaning gets lost a little bit, so when you change it up,” added Ms. Kordenbrock. “It’s been a growth exercise in the best of ways.”

When asked how they persevere through it all, Ms. Kordenbrock said, “I’m not a scientist, but the whole deal that we’ve all believed from the time we’ve entered our faith life, is that we stay the course. So it will get better, we’ll get through it.”

“Certainly without the unwavering support of Bishop (Roger) Foys, Father (Ryan) Maher and the community, that would be much more of a question mark over my head,” said Dr. Schaffer. “So it’s been quite inspirational to me week to week that we’re doing something we should be doing, and we continue on the same path. There will be an answer at some point.”

For Midnight Christmas Mass, they will be joined by a violinist in the choir loft. The live broadcast from the Cathedral will feature a recording of the Cathedral Bishop’s Choir and instrumental ensemble from 2019 starting at 11 p.m., and the in-person celebration will feature the trio beginning around 11:40 p.m.

Both musicians advised people in choirs everywhere, who haven’t been able to sing with their group, to take care of their voices while at home. “There will be a learning curve coming back, whether you’re professional or amateur — if you don’t do it, you lose it,” said Ms. Kordenbrock.

“I want to acknowledge choirs everywhere that are pining to return to some form of sung liturgy — I share in that anticipation,” Dr. Schaffer said. He also hopes congregations will respond boisterously when they are once again allowed to sing in Mass.

“No matter what the circumstance, we can make something meaningful out of it,” he said.

For a complete listing of Christmas Mass times around the diocese, see page 7 in the Dec. 18 Messenger.