The DPAA is a chance for members of the Diocese of Covington to support the many ministries and services under the umbrella of the Church, such as care for priests, Catholic Charities, school grants, food pantries and more. The kickoff dinners transition the appeal from its leadership phase into Phase II, where leaders take the appeal into their parishes.

Last year, the appeal goal was $2.55 million, which was surpassed and the money collected over goal was returned to parishes. This year, the goal is $2.6 million and Mary Paula Schuh, 2020 DPAA General Chair, promised that the same rebate program applies this year.

The dinners also host the first viewing of the DPAA video, featuring taped remarks from Bishop Roger Foys and many individuals who have been helped by the appeal. 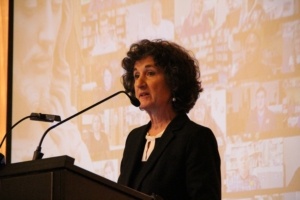 This year’s theme is “Hope does not disappoint … The love of God has been poured out into our hearts” (Romans 5:5).

Mrs. Schuh spoke on the theme and the difference made by each donation: “The DPAA is one of those life-changing things … Each one of you can make a difference in our larger community. So let us be known in the Diocese of Covington as a community of love, as a community that gives from the heart.”

She also commented on the timeliness of the events. “It is special that the DPAA happened at what, in my opinion, is the most introspective time of the liturgical year — Lent,” she said.

Bishop Foys also addressed the crowd following dinner. He praised the help that the DPAA gives to the parishes and priests of the diocese, beyond the larger organizations.

“This campaign can also be a real help to parishes that need money to carry on the mission. Your generosity has enabled us to do that,” he said. 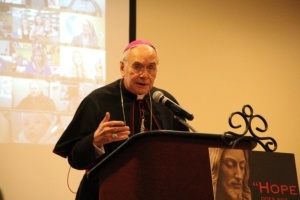 He spoke to the significance of hope in today’s society. “People have been faithful and that is a testament to your faith, and that brings hope. The world around us is never hopeless as long as we have faith. … Thank you for giving hope to so many people who, without your generosity, without your caring and your compassion, might feel hopeless and live in a hopeless way.”

The second night officially closed the leadership gifts phase, ending with an appeal from Randy Rawe, 2020 Leadership Gifts Chair, to donate to this year’s cause. 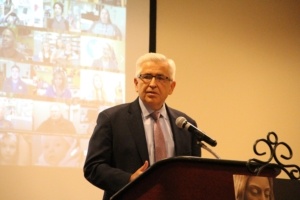 “You never know where the check you’re going to write tonight, the person you help, where that’s going to lead,” said Mr. Rawe. He said he departed from his script after being so moved by the video that he had to speak from the heart.

DPAA pledges can be made online at www.covdio.org. A pledge can be paid over 10 months, running from June 2020–March 2021. One hundred percent of all gifts collected over a parish’s goal will be returned as rebates to the parish for projects and ministries.

‘Bill’s Kids’ carries on legacy of Special Forces soldier with heart for...