In a letter addressed to parents dated April 11, the Diocese of Covington Department of Catholic Schools announced that Bishop Roger Foys had approved the recommendation that “beginning with the 2019-2020 school year, the students of Holy Trinity Junior High School (Newport) will join the other students at Holy Trinity Elementary (Bellevue) to create one kindergarten through eighth-grade school building.” Holy Trinity School has served the cities of Bellevue, Dayton and Newport since the consolidation of three schools — Holy Spirit, Newport; St. Bernard, Dayton; and St. Michael, Bellevue — in 2002.

The letter, which was signed by Michael Clines, superintendent of Schools; Msgr. William Cleves, pastor, Holy Spirit Parish, Newport; and Father Martin Pitstick, pastor, Divine Mercy Parish, Bellevue, and St. Bernard Parish, Dayton, stated that this move is in line with the mission of the Alliance for Catholic Urban Education (ACUE) and is part of the ongoing effort “to keep Catholic education affordable and available in the urban core.”

The move, according to the letter, will unite the student body, faculty and principal at one location and alleviate the expense involved in operating two buildings. The letter acknowledged the sacrifice the change means for Holy Spirit Parish and stated that the monies saved would be put toward the students’ educational programs. The three parishes will continue their partnership to support the success of the school. 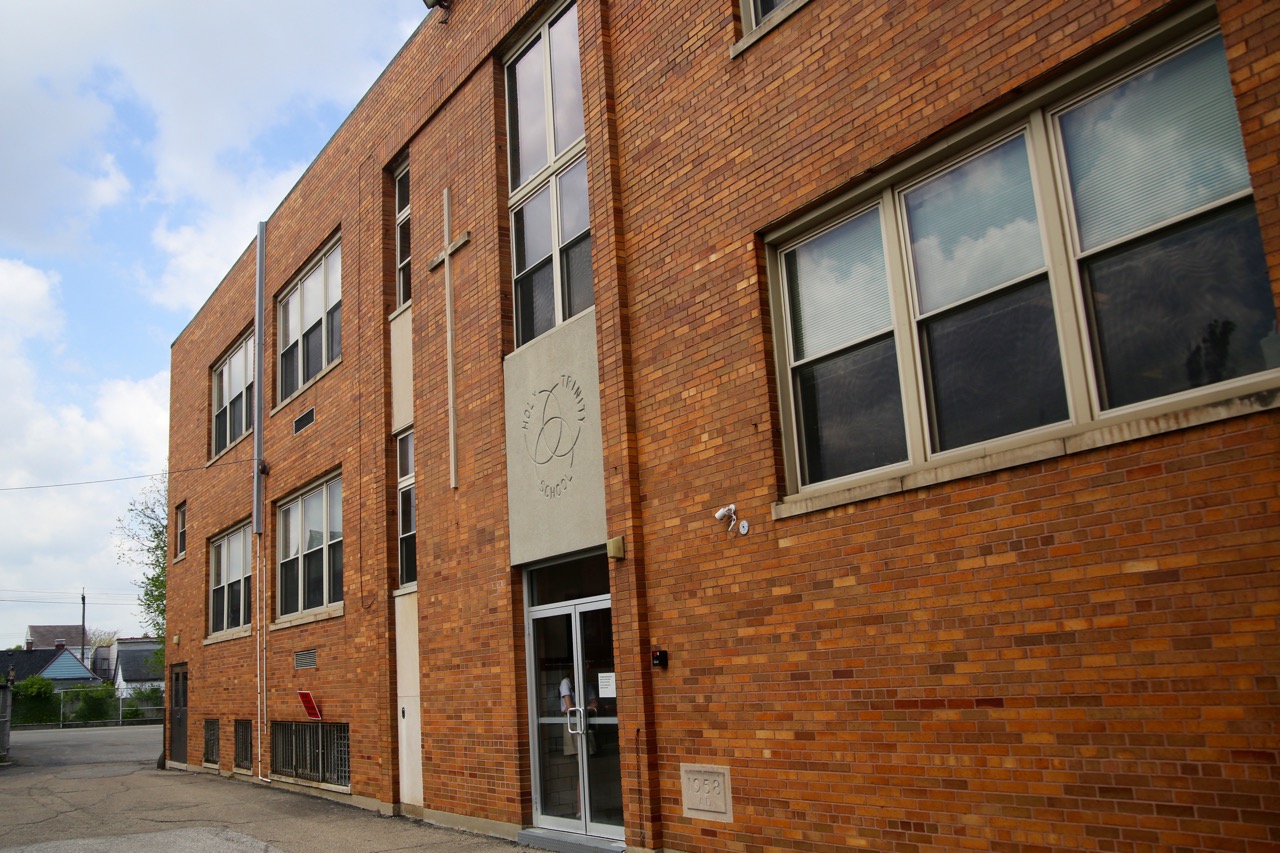 “Catholic education is so important and we must do everything in our power to keep it as affordable as best we can; this is especially vital in our urban core,” said Bishop Foys in an interview with the Messenger. “We believe in our Catholic schools and sacrifice for our schools because our students are priceless. That’s why we do what we do — it’s not the buildings, it’s the students and the faith taught at those schools that matter.”

Kendra McGuire, assistant superintendent of Schools, agreed that the most important facet of using one building was making tuition more affordable, but, she said, that is just the first of many positives.

“Another positive aspect is that with the money we are saving, we can invest more into programs for the students,” said Mrs. McGuire. “Therefore, academically it is a better situation for the students because they are going to get the benefits of the money for their schooling program as opposed to it going into the cost of the facility.”

Mrs. McGuire said that the majority of the families that are enrolled at Holy Trinity School reside in Bellevue or are parishioners at Divine Mercy, and that the central location in Bellevue will cause the least amount of disruption for the families. Also, the Bellevue building, as opposed to the building in Newport, is large enough to fit the K–8 classes. The Holy Spirit Child Development Center for infants, toddlers and preschool children will continue to operate in Newport with room to grow.

“At Holy Trinity School there are going to be more activities that the students can partake in that they didn’t have before that will benefit the school as a whole,” said Mrs. McGuire. “For example, student government; we were looking at establishing an art program, which they don’t have currently. Another possibility is an accelerated or advanced math class at the middle school level, and so on.

“I feel like all of that is just the beginning,” she said. “Once this move is established there are going to be a lot of new opportunities to achieve more.”

Mrs. McGuire is happy that Katie Jacobs is the principal of Holy Trinity and believes that she is the right person to have in place to keep things moving forward.

“Mrs. Jacobs has really done a great job,” she said. “As a former student of St. Bernard School, she has a personal connection and her heart is in the mission of the school. She is a strong principal and is working really hard to see the school grow and be successful.”

On Friday, following the official announcement, Mrs. Jacobs spoke to the junior high, particularly the sixth- and seventh-grade students, about the change. She said that they were very excited.

“I told them that I have some high expectations for them as leaders of the school,” said Mrs. Jacobs. “I told them that I expect them to demonstrate for the younger students what it means to their work, to behave in the classroom and to respect the teachers.”

Mrs. Jacobs said that they are planning on building family units next year — taking students from every grade level and combining them into families. At least once a month they will enjoy special family activities together to help them build unity and work in collaboration with each other.

“I told the upper class students that I was going to count on them to help build that linear alignment of all the grade levels when we do our special activities,” she said.

Mrs. Jacobs said that she was also excited about the move, and she believes it is going to build up morale for the entire school.

“I think that a lot of times they felt left out at the junior high — the teachers included, because there was only three of them. So, I think it is going to be a big morale boost to have that team atmosphere,” she said. “This move will be uniting us into one campus. We will all be in one spot together and it will be great for the students and the teachers.”

Mrs. Jacobs said that everyone seems to be really enthusiastic and she has received nothing but positive feedback from parents, the teachers, the students.

“It’s going to be a busy summer, but so far this move has been very welcomed,” she said. “I am happy to have Bishop Foys’ blessing on this and to know that he fully believes in our school. To be back on one campus means a lot to us. I am ready to hit the ground running and prep for next year.”

Holy Trinity School, Bellevue, has open spots available for every grade and is currently enrolling for the 2019-2020 school year.

Bishop Foys addresses Covington Catholic community — ‘I stand with you …...

Thomas More University announces its next president
Scroll to top