The annual Pro-Life Mass, celebrated Oct. 13, was uncharacteristically quiet, with just a few crying babies present and a congregation spread out at a safe distance across the Cathedral Basilica of the Assumption. 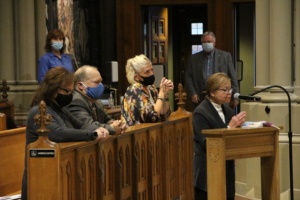 Members of the Pro-Life Office lead the rosary before Mass Tuesday night at the Cathedral Basilica of the Assumption.

Every parish in the Diocese of Covington was simultaneously celebrating a Mass with its own parishioners in solidarity with the Cathedral Basilica Mass, so that more people than ever could be involved in the pro-life event.

The Pro-Life Office began the evening at the cathedral with a rosary led by Theresa Gray before Mass began at 7 p.m. A statue of Our Lady of Guadalupe, Protectress of the Unborn, was placed at the front of the church, surrounded by flowers.

Reflecting on this year’s Respect Life month theme, “Living the Gospel of Life,” Bishop Foys urged the congregation to begin their pro-life efforts with prayer. The Mass took place on the 103rd anniversary of last apparition at Fatima, and “Mary asked the children to pray, especially to pray the rosary,” he said. “Every effort that is worthwhile should begin with prayer. Oftentimes we see prayer as a last resort … that’s backward. We begin with prayer.” 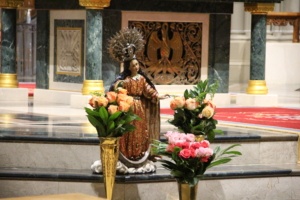 A statue of Our Lady of Guadalupe, donated by a parishioner of St. Anthony Parish, Taylor Mill, graced the steps of the Cathedral Basilica of the Assumption.

Bishop first addressed the issue of abortion. “Life begins in the womb, and for these 47 years it has been legal to extinguish that life with no repercussions. … So we pray. That has to be our first mode of attack, to pray.”

He then addressed all forms of life. “What does it mean to respect life?” Bishop Foys asked. “Being pro-life is not always so much about something negative but doing something positive. If we could ever come to a real appreciation of life, to an understanding of life as a gift from God, no matter what stage, then taking the life of a child wouldn’t be a problem because respect for life would be engrained in our soul. … It begins with respecting life in the womb but it has to be more pervasive than that. It has to do with how we respect each other, and that covers a whole gamut of life’s situations and encounters.”