A dream has finally come true for parishioners at St. Cecilia Parish, Independence. Under the leadership of Father Mario Tizziani, the parish recently completed a $6 million dollar building project for a Parish Center and addition to the parish school.

The community gathered, Feb. 23, to formally dedicate the new facility. The dedication included a ribbon cutting and a formal blessing by Father Ryan Maher, vicar general, who represented Bishop Roger Foys. Bishop Foys had planned to attend, but was unexpectedly called away for a family funeral out of state.

“The project at St. Cecilia School has been a long time in coming to fruition but it is obvious that the wait was well worth it,” said Bishop Foys. “What a tremendous boost the completion of this project is to both the school and parish community. I congratulate Father Tizziani and all those who have worked so hard to bring this project to fruition.”

Father Maher extended Bishop Foys’ greetings along with his own remarks. “What we have here, we’re celebrating a work of love,” said Father Maher. “So many hands were a part of bringing this together. … We are building for the future.”

The building contains a high school-size gymnasium with a walking track and lobby and concession stand, a large media center, STEAM lab, a parish meeting room, classrooms, an art/music facility and an early childhood learning center.

Father Tizziani approached the finance council about the project in 2011, but the idea has been in the minds of the community since the 1980s. The enlarged and improved facility will sustain growth in the 21st century.
Kenneth Collopy, principal, expressed his gratitude to a thriving community who was willing to put in the work for its children. “This space is going to make a dramatic impact on our children’s education here … it puts a roof over the three values our community is founded on — faith, academics and community.”

“It is perfect that we are celebrating today as one community,” said Kendra McGuire, associate superintendent of Catholic Schools and former principal of St. Cecilia School. “A community that came together and donated its time, its talents and its treasures seeking to build a facility that would meet the needs of its current and its future members.” 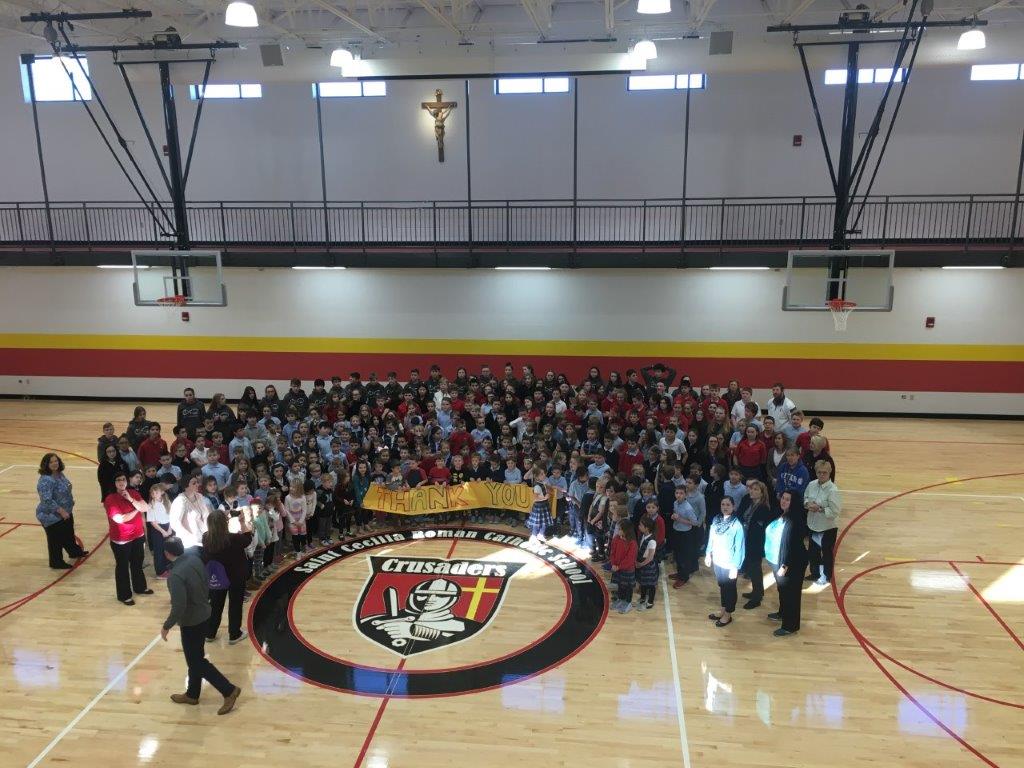 Bishop Foys also looked to the future. “It will serve the St. Cecilia community for many, many years into the future,” he said. “None of us does what we do only for ourselves and for our own well-being. We look to future generations to build on what we have done. May future generations of parishioners and students of St. Cecilia parish and school face the challenges of their time and look with gratitude on what is being given them to build upon.”

Father Tizziani explained that he first proposed the idea after the parish paid off its debt in 2011. He formed the Parent Teacher Organization in 2012, which has since contributed about $60,000 toward the building project.
Initial discussion began in 2014 regarding what the parish and school needed. Father Tizziani and the finance committee then launched a building fund campaign 2014–2018, and ground was broken July 10, 2017. Century Construction was the primary contractor.

While the building stage lasted longer than expected, parts of the building became available for use in September 2019. The project was officially finished in time for the February dedication.

Mrs. McGuire, principal 2011–2016, explained that the planning committee was established to discuss the dreams for the school. They looked at similar facilities and calculated what they needed for St. Cecilia School.

They ended up with two valuable new assets — expanded room for the community as well as a daycare.

“Having the gym facility and the media center, as well as the meeting space, its added spaces that will bring the families and community together for more fellowship activities,” said Mrs. McGuire. The colorful media center includes a library, accessible technology and a history center.

The daycare has double the room, which means double the capacity to meet the parishioners’ needs. “It’s good for parents to know that they can have their children all at one place from a young age through eighth grade, and it’s faith based, that’s what a church is supposed to be,” said Mrs. McGuire. “We don’t just go to Church there on Sunday and drop our kids off for school, we’re there at other times and that develops faith because it’s more than just sitting in church pews, it’s our interactions with each other.”

Margaret Hoffman, member of the planning committee, echoed these thoughts. She said the committee thought students were at a handicap without a gym for practices and games. “It grew from a need to expand,” she said about the project.

“If you help the children, that is building community and all the functions that surround the children bring in the parents and the community to watch sports and support their education … it all goes together.”

Father Tizziani said that there has already been an uptake in enrollment at the school because of the gymnasium and a safe, local place for practices and games.

“We hear that Jesus increased in wisdom and stature,” he said. “Teaching children to grow in knowledge as they grow physically… I think our new facility really adds to that ability.”

Ms. Hoffman said the most impressive part of the project, however, hasn’t been the physical structure but the people who have made it possible.

“People have been very patient,” she said. “The fact that so much money was raised is a testament to the commitment of the members of the parish to actually fulfill this pledge over five years. That’s a long time to be fully committed to this project and I think the parishioners are to be commended for their diligence.”

Father Tizziani agreed. “Where we are now, this is St. Cecilia,” he said. Thank you for giving so that this dream is a reality.”

He also insisted that “this is not just Father Mario’s vision, this is Father (Robert) Urlage’s vision.” Father Urlage was pastor of St. Cecilia 1982–1992 when the new church was built, and was present at the ceremony. “We started this project on the coattails of a great pastor and a great man.”

Father Tizziani especially expressed gratitude for the restored crucifix in the center of the back wall from St. Matthew Parish, Kenton. It hangs as a reminder of the reason for the building, the same purpose as the prominent images of Jesus and St. Cecilia on the building’s entrance. The two stone friezes were crafted from carrara marble in memory of a generous parishioner’s husband. They were crafted in Italy and brought over to adorn the front entrance to the Parish Center.

Brian Harvey, associate director of buildings and properties for the Diocese of Covington and overseer of the project, said through the long production time, the end result is truly rewarding.

“To see the kids running around the gym today… that’s what makes it worth it,” he said.

“I’m satisfied and relieved that we’re finally in the building,” said Father Tizziani. “I give thanks to the Lord that it turned out so beautiful.”

Ash Wednesday: ‘Return to the Lord with your whole heart’
Scroll to top