A misty morning and a vague drizzle of rain on fall leaves couldn’t dampen the spirits of those gathered to install the newly arrived steeple at St. John Mission, Dividing Ridge on Oct. 20. The mission, founded as the parish of St. John, was the life’s work and joy of eight Irish immigrant families when they came over to the United States. Over 130 years later, their descendants are honoring their legacy by restoring the church with a new steeple and roof.

Since the steeple fell in the 1970s, the church has been without its defining feature. In late 2018, one of the third-generation descendants initiated the project to celebrate his 60th birthday. “I wanted to understand the faith these founders had,” he said. “They cleared their land, not the best land, with mules and by hand. They had these rock piles everywhere. Still living in log cabins, but instead of building their homes they built this church…. What kind of faith in Providence did they have? … I don’t have that kind of faith and I wanted to understand it.”

On the morning of Oct. 20, those present watched as a large crane carried the newest reminder of that ancient faith to the top of the tiny church building. The gloomy clouds drew out the solemnity of the moment as the vision became a reality, and the church once again was becoming complete because of the work of its people.

The steeple project is built on donations from five of the eight original families: 32 donors total from three generations of families and friends. It began as a steeple only, and ventured onto the roof, once it was discovered that the current roof was unsound. Once the Parish Council and Bishop Foys approved the idea, the blueprints were set into motion. Garlan Vanhook of Vanhook Architectural designed the new steeple based on pictures, measurements and diagrams of the original.

The endeavor has brought together the parish and the eight founding families, many of whom are no longer in the area or even parishioners. Some are not even Catholic, but wanted to honor what their ancestors began. Four donors have even passed since the project began. 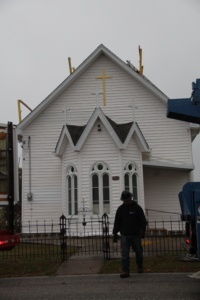 St. John Mission before the restoration.

As one of the smallest churches in the Diocese of Covington with one regular Sunday Mass, St. John only houses 12 pews. According to a “History of the Church” written in 1919 by the pastor, Father J.J. Taaffe, Sunday mass was only said at St. John’s every other Sunday during that time. There were times after Father Taaffe’s death that there were no pastor and therefore no Sunday mass, which strikes a chord with the faithful of 2020. Their longing for the celebration of Mass has been echoed in the present day, said Steve Kelly, a major supporter of the project and descendent of a founding family.

The founding date on the cornerstone reads 1856, though the community had existed for many years before, said Mr. Kelly. He grew up in St. William Parish, Williamstown, but his family originated at St. John’s and has been buried in the cemetery there for generations. The original name of the church was St. John’s Dromard, an Irish word for “high place.” Located at the highest point in Pendleton County, the church overlooks a large ridge and borders many of the farms of the founding families. 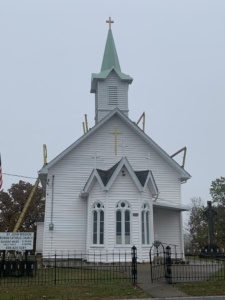 St. John Mission after the restoration.

Evelyn Peluso, a parishioner since 1970 whose ancestors are also buried at St. John, said that when she came, an elderly parishioner named Sherman Tomlin would ride in on his horse or his motorcycle to ring the bell in the steeple for Mass every week. The steeple crashed in the early 1970s because of rotten wood, Mrs. Peluso said, and the bell has been outside on a cement block ever since. Her three boys would always serve at the Sunday Mass while they grew up.

“I think it’s going to be a wonderful thing,” she said. “We’re going to have a bell system to call out across the hills, reminding people it’s time for Mass.”

“And the church never really looked right without a steeple on it,” said Mr. Kelly. He has been heavily involved in the project even though he moved to Colorado several years ago. “We’re glad that we’ve been able to work toward getting that replaced,” he said. “Everyone wants to see a steeple put back up there and wants to do their part to help make that happen financially.”

The steeple installment is contracted by Marty Zalla, owner of Building Crafts: a craftsman, artisan and structural engineer, retired CEO, honored in the business hall of fame of Northern Kentucky and dear friend of one of several of the founding families. While the community paid for the steeple and the new roof, Mr. Zalla is completing the work as a contractor completely for free to give back to the community. He would often visit the Kelly farm during the summers during his childhood, working, and developed an attachment to the simple rural community.

Mr. Zalla said setting the steeple correctly will probably take about two weeks with three workers. When asked about his motivations for donating his carpentry work, he said simply: “I spent my summers there and I have a liking for the parish, that’s all.”

Roger Frisch, a parishioner at St. John for six years and member of the Parish Council, said the Council approved the project in early 2019, and was very pleased with motion to build a roof, which the Council had been talking about for a few years prior.

For the parishioners, he said, it’s about more than looking good. It’s a legacy to uphold and a hope that the small but stubborn church will stay open.

“I think it’s pretty important,” he said. “We have some old pictures of the church and the steeple looked really nice. I think getting it back really turns the building into a real church, it’s going to have chimes for Sunday morning… I think it’s going to bring back some of that history. We really like what’s going on; it’s good to have that old feeling back.”

“We worry about them closing the doors, like other small parishes,” said Mrs. Peluso. “But with the roof going on, it seems to have given us life again, and now we’re proud to have things looking so nice. I think it’ll be an encouragement for Catholics in the area to come to our church. We feel so blessed that people who have moved away or passed on have left this money to improve our church.” 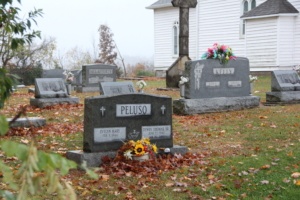 The founding families and their descendants are buried in the graveyard next to the church, still serving as a reminder of the faith the pilgrims had to build a house for God before a house for themselves.

Mr. Kelly agreed. “The rural church has struggled over the years, but I think it’s a testament that the church is going to survive another couple hundred years… we’re just happy as a family that we’re able to make improvements to the church to make sure it does last through many more generations.”

The church’s pastor, Father Benton Clift, was just appointed to St. John and St. William, Williamstown this summer. Though he’s new to the community, he’s enjoying discovering the depth of its roots and entering into the legacy. “It’s a wonderful place and the steeple will make it even better,” he said.

“I think it sort of brings people even deeper together in their wonderful little worshipping community, which is very dedicated, very small but vibrant… it’s a wonderful time to be here,” he said.

Don Knochelmann, director, Office of Buildings and Properties for the diocese, said he enjoyed being part of the church steeple project. “It was my honor to work with Mr. Zalla and the construction team, who were instrumental in the successful completion of this project.”

The initiator of the project, who prefers to remain anonymous, said it was “moving” that “Bishop Foys had faith in this little church.” The new steeple sets the tone for regaining the reverence and trust that the ancestors had. “I think it reflects the best of our faith,” he said. “Strong-willed but humble folks.”

As they stood in the rain and looked with awe and delight upon the house they have maintained for the Lord on the top of the mountain, the community members at St. John Mission continue to build that reverence and trust themselves.

Pro-Life Mass unites diocese in prayer to respect all life

The Eucharist: how we should receive this gift
Scroll to top