Father Jordan Hainsey, Messenger contributor.
Christianity has used symbols from its very beginnings. Think of the fish (ichthys) made by two intersecting arcs. It stood for Iesous Christos Theou Yios Soter, i.e. Jesus Christ, Son of God, Savior. Aside from the theological overtones of the Eucharist and the miraculous feeding of the 5,000, it was a secret symbol used to identify one’s self as a Christian. The fish pointed to a deeper reality — an identity.
The same is true of saints in artwork. How they look, what they hold, how they are dressed and even the colors they are shown in are highly symbolic, revealing their identity. Much of the information that comes down to the Church in this regard comes from her Hagiography, the body of literature that describes the lives of saints and their cult tradition. 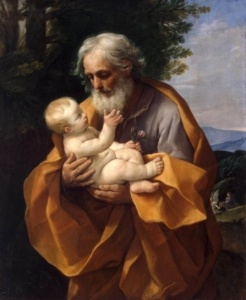 In the early days of the Church, St. Joseph appeared only in images related to the Nativity, drawing on scriptural references. In the 5th-century arch mosaic at Rome’s church of Santa Maria Maggiore, St. Joseph is young, bearded and garbed as a Roman.
Other depictions came to be derived from the “Protoevangelium of James” — a 2nd-century work, not part of the Christian biblical canon. Artists following this tradition depicted St. Joseph as an old man, grey and balding. By the 16th century though, artists were returning to more youthful depictions.
Joannes Molanus, a Catholic theologian during the Counter Reformation, worked to make the Council of Trent’s “decrees on sacred images” the marching orders for a generation of artists to follow. Molanus advocated that it was far more appropriate to show St. Joseph as a young man — one capable of restraining his carnal urges, one fit enough to take his wife and child into Egypt, and one strong enough to support them with his labor as a craftsman.
Neither visual tradition has remained a constant though. St. Joseph continues to be shown old and young, from statues to holy cards. He is almost always shown though carrying a flowering staff of lilies. It alludes to the flowering rod of Aron (Numbers 17) and a miraculous account from a 13th century hagiographical work titled “The Golden Legend.” Garbed in brown, the color of earth, and green, the color of new life, the robes of St. Joseph evoke the ideas of humility and hope. 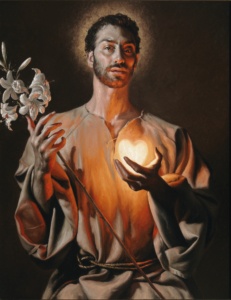 The Diocese of Covington has chosen “The Chaste Heart of St. Joseph” by Giovanni Gasparro as its image for the Year of St. Joseph. Born in 1983, Gasparro is a young artist from Bari, Italy. Gasparro draws on the traditional iconography of St. Joseph while offering a contemporary depiction that is accessible to the faithful of today. The strength of St. Joseph’s character extended to all aspects of his life and person — including his heart.
With his whole being illumined by God, Gasparro depicts St. Joseph’s heart on fire with the love of God, and a flowering staff points to his purity. Together the heart and staff remind the viewer that purity of heart lies within reach, thanks to the grace of God and the intercession of Joseph.
However an artist depicts St. Joseph, the point is the same: to draw the faithful into contemplation of the man at the heart of the Incarnation story, the man Pope Francis has called a “minister of salvation.”

Q&A: Indulgences in the Year of St. Joseph