Blog - Latest News
You are here: Home1 / Featured Stories2 / Triduum of Prayer to end with blessing of the city

Bishop Roger Foys will travel through Covington with a relic of St. Rocco Saturday, August 22 after the 10 a.m. Mass at the Cathedral Basilica of the Assumption, Covington. The Mass is a conclusion of a Triduum of Prayer to end the COVID-19 pandemic and all its effects, including an end of fear and division among God’s people. Bishop Foys will ask for St. Rocco’s intercession over Covington and the world to end the plague.

St. Rocco, or Roch, is the patron saint invoked against plagues and serious illness. What makes him such a powerful intercessor?

Rocco was born in Montpellier, France around 1295. His father was the governor of the city, and their family was quite wealthy. It is said that he bore the birthmark of a red cross on his chest, and was an extremely devout child.

Rocco lost his parents at 20 years old. He then gave the governorship to his uncle and distributed his goods among the poor, leaving for Rome on pilgrimage with no worldly possessions. During his journey, the Black Plague hit Europe, and the towns he passed through were stricken with illness. As he traveled, he tended to the sick and cured people with the sign of the cross. He continued to cure plague victims until he became ill himself with sores and retreated to a hut in the forest, alone. A dog came upon him, and sustained him for a time, bringing him food and licking his sores. Eventually, the dog’s owner followed the dog to Rocco’s hideout and cared for him until he recovered. This is why Rocco is usually depicted in art pointing at a sore on his leg, with a dog nearby. 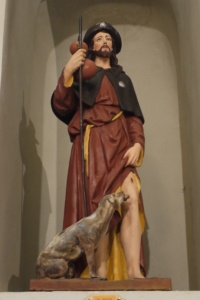 It is rumored that he joined the Franciscan order, but there are not many sources to back up this claim.

He eventually traveled back to his native France after his recovery, and returned home. Upon his arrival, he discovered Montpellier at war, and since he would not explain his identity, he was arrested as a spy. His appearance was greatly altered by his illness, and he was still dressed as a poor pilgrim. Instead of explaining himself and revealing his identity, he entrusted himself to God’s will.

He spent five years in prison, where he died in 1327. Upon his death, his birthmark identified him as Rocco to his uncle — the governor. His family then held a splendid funeral for him and had a Church built in his honor. His relics were carried to Venice and remain there.

During the Middle Ages, he was highly revered and commonly prayed to, since plague was far more common. His intercession has been known to cure many who are ill, including all who caught the plague during the 1414 Council of Constance. The town prayed to him, and the plague left them.

Under the invocation of Rocco, Pope Paul III instituted a confraternity to have charge of the church and hospital erected during the pontificate of Pope Alexander VI. Because of its quick popularity, Pope Paul IV raised it to an archconfraternity, so that other such confraternities could be founded.

He is the patron saint of invalids, dogs, the falsely accused and against contagious diseases. His feast day is August 16.