Blog - Latest News
You are here: Home1 / Catechesis & Evangelization2 / Source and Summit Articles3 / ‘My Body … given up for you’ 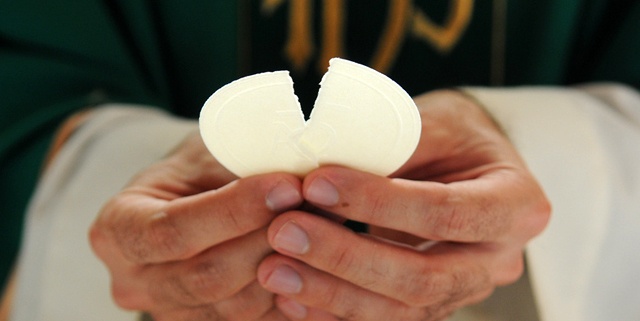 In his “Summa Theologiae,” Thomas Aquinas makes the point that the Eucharist is at once a “sacrament” and a “sacrifice.” He wrote, “In this sacrament is included the whole mystery of our salvation” (“Summa Theologiae,” III, q. 83, a. 4, c). While St. Thomas notes the close connection between sacrament and sacrifice in the mystery of the Eucharist, he nevertheless sees them as irreducibly distinct from one another, being different concepts and having different effects.

The Eucharist satisfies the concept of a sacrament, Aquinas observed, insofar as it is received and consumed, while it satisfies the concept of sacrifice insofar as it is offered (cf. III, q. 79, a. 5, c). The sacramental effects, graces, are therefore limited to those who are actually present to taste it, while its sacrificial effects may extend to all those for whom it is offered.

St. Thomas Aquinas’ predecessor, Peter Lombard — theologian and bishop of Paris (d. 1160) —recognized that it was important to note that Christ’s saving sacrifice on Calvary is a “once for all” action, unique and unrepeatable; but at the same time the Church’s daily Eucharist action is a genuine sacrifice, in which Christ is truly offered. The offering takes place in one way on Calvary and in another way on the altar. St. John Paul II, referring back to the Council of Trent, said that “the Mass makes present the sacrifice on the Cross; it does not add to that sacrifice nor does it multiply it” (EE, n. 12). He concludes, “The sacrificial nature of the Eucharist cannot therefore be understood as something separate, independent of the Cross or only indirectly referring to the sacrifice of Calvary.”

In the 21st century, perhaps it strikes us as strange to speak of a “sacrifice” in the first place. The word harkens back to the animal sacrifices of the Old Testament — complete with blood sprinkled on the altar — and, in the context of the Mass, refers to the death of God’s only Son for the reparation of sins. In other words, death to the innocent to save the guilty. Why would a God (a Father) of mercy demand such a thing? This is often a point of contention that popular atheists use when pointing out what they deem a major flaw in the Gospel narrative. “What kind of a blood-thirsty god would demand the death of his son to pay for the world’s crimes?” And yet it is St. Paul in his first letter to the Corinthians connects the crucifixion to the paschal sacrifice, calling Christ “our paschal lamb” who “has been sacrificed” (5:7).

In his book, “My Body Given for You,” recently published in English, Helmut Hoping, German professor of dogmatics and liturgy, writes that the Lord’s sacrifice on the Cross must be understood in terms of the life laid down for us “not in terms of the Crucified as the victim of violence” (“My Body Given for You,” Ignatius Press, 2019). Eucharistic Prayer II reminds us that Christ “entered willingly into his Passion” first and foremost as a gift, out of the greatest possible love for the Father and for us. Christ is the true sacrificial lamb and, at the same time, the true high priest who makes the offering on the people’s behalf. The Cross, then, is the true altar.

The Church is called to participate in the sacrifice of Christ. The Second Vatican Council’s Dogmatic Constitution on the Church, “Lumen Gentium,” teaches that the faithful, “taking part in the Eucharist, which is the source and summit of the whole of Christian life, offer the divine [sacrifice] to God, and offer themselves along with it.” (LG, n. 11) In this way, Christ’s sacrifice makes it possible for us to, in the right disposition, willingly offer ourselves back to God and unite our sufferings to the Cross.

In his first encyclical, “Redemptor Hominis,” Pope John Paul II wrote that the Father accepted the sacrifice of Christ, “giving, in return for this total self-giving by his Son, who ‘became obedient unto death’ (Phil 2:8), his own paternal gift, that is to say the grant of new immortal life in the resurrection.” (RH, n. 20). The Eucharistic sacrifice makes present not only the mystery of Christ’s passion and death, but also the mystery which crowned that sacrifice — the Resurrection. Christ risen has become for us the “Bread of life” and partaking in the Eucharist applies the event of the Resurrection to our lives.

The Eucharist — The font of the Holy Spirit

‘O Come Let Us Adore Him’
Scroll to top