To me, one of the most moving aspects of the Easter Triduum that accompanies and accentuates the sublime celebration of the Paschal Mystery has always been the dramatic changes that happen in the interior of the church. After the conclusion of the Holy Thursday liturgy, the Blessed Sacrament is reposed in a different location, leaving the main tabernacle empty. Quite often thereafter, linens, candles and other items are removed. When entering the church for the Liturgy of Good Friday and seeing the dark, empty tabernacle, I always experience a deep sense of emptiness that drives home the emphasis of the Lord’s death for our salvation. But shortly thereafter, on Holy Saturday, the Light of the World re-enters our darkened world after rising from the domain of death. The tabernacle remains empty until after Communion when the Risen Lord is once again reposed and is present for his people. If you’ve ever been able to attend the dedication of a new church building or chapel, a similar experience occurs when the tabernacle remains empty until the Eucharist is consecrated for the first time in the new place at the dedication Mass, and when reposed after Communion, the Lord’s Real Presence dwells there.

The tabernacle in each church building serves various functions. As a repository for the Real Presence of Jesus Christ in the Eucharist, a treasure worth more than any amount, it’s often constructed with costly metals and may be adorned with jewels, like at our Cathedral Basilica. For the protection of such a priceless treasure as the Eucharist, the tabernacle is locked. But despite being secured, it is accessible for Mass, for Communion to the sick, and for reserving the Eucharist for Adoration. Most importantly, though, it is the physical dwelling place where the Lord is always present to his people.

The dwelling place of the Real Presence of Jesus is sufficient enough to define the tabernacle, but to understand more about its role we have to look to the Old Testament, the 24th and 25th chapters of the book of Exodus. Moses and the Israelites have just arrived at Mount Sinai. The Lord God makes himself manifest to his chosen people (whom he had just delivered from slavery), with flashes of lightning, billowing smoke and peals of thunder. But Moses was to lead the people to the Promised Land, and the Lord desired to accompany them by being present in the Ark of the Covenant. In these chapters from Exodus, construction plans are given for the ark and for various other elements of the Lord’s dwelling. The ark was to be made of acacia wood, have every surface covered in gold, and was to be adorned with angels. In later chapters, after the construction was complete, the Lord descended to his dwelling place in the form of the glory cloud, the Shekinah. It was here that bread was placed in the Lord’s presence in sacrifice and was only able to be eaten by the priests, an early prefiguring of the Eucharist. Later in salvation history, Solomon built the Temple in Jerusalem and the Lord dwelt there in the Holy of Holies, an area separated by a large veil. Sacrifices were offered to the Lord day and night. 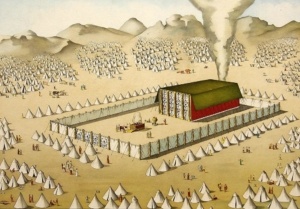 It was important for the people of every generation to know of the Lord’s presence among them. But also, the Meeting Tent was where Moses met with the Lord panim-al-panim … that is, face to face. No one else had such an intimate friendship with the Lord to be able to meet him face to face, only Moses, the people’s intercessor. One element of Moses’ interactions with God that has always fascinated me is the fact that Moses’ face became radiant from being in the Lord’s presence — so much so, that it frightened the people and he was forced to wear a veil.

Despite the many years that have passed since the time of Moses, several things are still the same. First, the Lord still desires to be present to us and to accompany us on this journey through life, and as such, is still very present to us in the most holy Eucharist. Veiled in the outward appearances of bread and wine, Jesus Christ becomes present to his people at each and every Mass. Second, as in the Old Testament, the Lord’s dwelling is still a sacred vessel (the tabernacle) made of precious elements and centrally located in many churches. The sanctuary lamp, a specific and conspicuously placed candle, denotes the presence of the Lord. Finally, like Moses, any amount of encounter with the Lord reserved in the tabernacle (or especially during Eucharistic Adoration) leaves a radiance within our souls. Our faces may not glow as Moses’ did, but our hearts, our minds and our actions cannot help but radiate Christ to the world if we continually place ourselves before the Lord, face to face.

In this life, we face many challenges each and every day that might seek to close our hearts and minds to the Lord’s Real Presence among us. But in each and every Catholic Church, the Lord is reserved in the tabernacle and waits for us to come before him … to speak to him whatever may be on our minds … to show his love to us and transform our souls. Humanity’s most intimate desire is unity with our Lord and Creator because we are made in his image and likeness and can only be truly fulfilled through unity with him. He continues to sustain us at every Mass through the reception of his very Body and Blood, and he makes himself available to us in a real way in every tabernacle in the world. He does this not because he needs us — he does this because he desires us, and he loves us. May we always remember that when the world faces us with adversity, the Lord waits to show us his love face to face.

The Eucharist: how we should receive this gift

The Eucharist and our longing for God
Scroll to top