Blog - Latest News
You are here: Home1 / Catechesis & Evangelization2 / Year of the Family3 / Grandparents proclaim the Gospel and hand down traditions through their...

In anticipation of the first celebration of Grandparents Day, which the Church will celebrate July 26 this year and on the fourth Sunday of July on the liturgical calendar, Pope Francis, in his May 31 message to grandparents said, “It makes no difference how old you are, whether you still work or not, whether you are alone or have a family, whether you became a grandmother or grandfather at a young age or later, whether you are still independent or need assistance. Because there is no retirement age from the work of proclaiming the Gospel and handing down traditions to your grandchildren. You just need to set out and undertake something new.” (See Pope Francis entire message on page #.)

Up a long and winding gravel driveway, past a still and tranquil pond in southern Campbell County is the home of Jim and Terry Roessler. It’s a welcoming, white country home with a wrap-around porch, an expansive yard with a Mary grotto, all set beneath a canopy of trees. The home exudes peace and love — a concrete expression of the Roessler’s themselves.

The Roessler’s are youthful grandparents and for them proclaiming the Gospel and handing down traditions to their 15 and growing grandchildren, especially passing on the Catholic faith, is essential. Mrs. Roessler notes that she has 18 grandchildren — 15, ages 13 on down, two in heaven and one on the way. For them sharing the faith is experiencing new adventures and is continuing traditions that have been handed down to them. Mrs. Roessler remembers her grandmother wearing a blue ribbon signifying her membership in a Marian group.

“I remember they would go and lead the rosary and attend Mass,” said Mrs. Roessler. She, too, has a devotion to Mary and, her children say, can be regularly found praying the rosary and inviting the family to pray the rosary together.

“I just know they were diligent about praying the rosary, going to Mass, and receiving the sacraments,” said Mr. Roessler about his grandparents.

“Holidays were wonderful,” Mrs. Roessler said about being with her grandparents. “That’s what you did, you had an Easter celebration and you went out and collected Easter eggs and you had a meal together. It’s always about having a meal together and sharing that day. I remember my grandmother always made me and my sister matching Easter outfits.”

Living the faith — living the Gospel of Life — being a witness to Christ’s love with an openness to life, Mr. and Mrs. Roessler said, is the primary role of grandparents. That role, Mrs. Roessler said, has not changed since she was a child, but she believes that role has become more urgent and grandparents have become more focused on that role as the culture becomes more and more secular and values and morals more distorted. 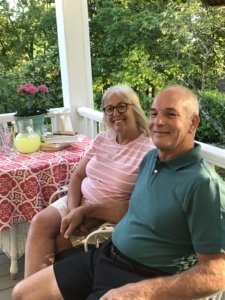 “I feel more of a need to be hands on, to be active in their prayer lives given the culture and passing the faith and the strength to live that faith along to them,” Mrs. Roessler said. “It is just living the faith, but now it’s done with more purpose or more intentionally.”

Like their parents and grandparents, Mr. and Mrs. Roessler continue the traditions of holiday celebrations — albeit less the matching outfits — and Sundays are always a celebration.

“Sunday dinners are a big aspect of our lives, we make that a priority no matter what has happened during the week,” said Joanna Roessler, the youngest of the siblings. “We have discussions around the dinner table and the nieces and nephews pick up on that.”

“Grandma and grandpa are living out the faith and they see that — their witness,” said Laura Rousseau, the oldest sibling and mother of five. “Their door has always been open to anyone and everyone who needs help.”

Mrs. Rousseau said that her parents didn’t have a lot when they were growing up, however they were always a friend to others in need — providing groceries and clothing to a neighbor who had even less, opening their home to a neighbor whose house had burned down, welcoming their children’s college friends during the holidays when they couldn’t afford to make the trip home. That attentiveness to others in need continues and is influencing the next generation of Roesslers.

“They are thoughtful and do hard work without being asked and they are always looking to help others especially our family,” said Mrs. Rousseau’s oldest child, Eva, about her grandparents.

Family and faith are paramount for Mr. and Mrs. Roessler and they willingly and joyfully accept the necessary sacrifices to ensure the best for their children and grandchildren. All five of their children have attended a Catholic college — the Franciscan University of Steubenville — and Mrs. Roessler decided to home school the children to ensure their formation in the Catholic faith.

“I guess they could have gone to a secular college, but I hear of so many people that come from good Catholic families that are taught right out of the faith,” she said.

The sacrifice has not gone unappreciated, “My family sacrificed a lot to make sure we went to a good Catholic university. That was a really hard time when we all went to college because financially it took a lot,” said Mrs. Rousseau. “We all married spouses that also believe the faith is important — my mom and dad sacrificed so much for this,” acknowledging the discord she has seen families experience when one or more family member is alienated from the faith.

“Living as an example and my parents just encouraging our lifestyles and their always there to support us in having children and help us to live out the faith, recognizing that all children are a gift from God,” is what Ms. Roessler believes her parents have instilled in her and her siblings and are passing on to the grandchildren. “They are willing to drop whatever they are doing to come and help us and love us where we are needing to be loved,” she said.

“No matter how hard it was they always strived to make sure our family was a unit and together and that the faith was the center of everything that we did,” said Mrs. Rousseau.

Mrs. Roessler teaches CCD at her parish and takes seriously the ministry of teaching students the sacraments. Each year she attends the St. John Bosco conference at Franciscan University so that she can continually learn and grow in the faith. As a couple, the Roessler’s have enjoyed traveling as a way to deepen their faith life — attending World Youth Day in Canada to see St. Pope John Paul II, traveling to Rome and Assisi. Mr. Roessler said that two of their children live out of town — one in Wisconsin and another in Georgia — and they make a point of attending the baptisms and first Communions of their grandchildren, that can also involve some travel.

Mr. Roessler is a man of few words but his support and dedication to his wife, children and grandchildren speaks for him by the way he provides for his family. He said that he nurtures his faith “by going to church and being with family — being with our daughters and son and the grandchildren.”

Mrs. Roessler said that it is her greatest hope that by living the Gospel of life that others will see the joy and gift that children are and choose to open their hearts and homes to the children God would entrust to them — no matter the timing, no matter the ability or disability.

“I wish more people would be open to life and accepting of children they don’t realize how much their missing, how many blessings they are missing,” she said. “I never imagined having five children, certainly not 18 grandchildren, but it’s a joy.”

A reflection on Fatherhood – Year of St. Joseph and Year of the Famil...