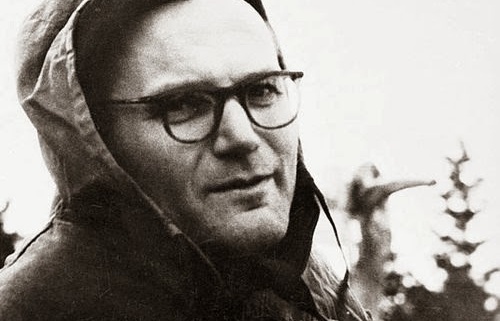 The Church recently celebrated the feast day of Pope St. John Paul II on Oct. 22, which is the anniversary of the liturgical inauguration of his papacy in 1978. There is a story about John Paul II from when he was young man that I have always found inspiring.

By the time he was 21 years’ old Karol Wojtyła’s entire immediate family was dead, and his country was occupied by Nazis. He and his people were exiled in their own land. Their home was transformed into something unrecognizable and, during that occupation and later the Communist occupation, the Polish people were forced to deny their values and their beloved culture completely.

Karol Wojtyła’s response to this was two-fold. He secretly (since it was against the law) entered the seminary, answering a burning call from the Lord to become a priest, and he helped establish an underground (secret) group called the Rhapsodic Theater. The focus of this group was a “cultural resistance” against those that occupied his homeland.

Through the celebration of beauty and identity, Karol, and his friends — the Rhapsodists — fought to keep Polish history, faith, and tradition alive. Under dire circumstances, they focused on the things that the occupiers couldn’t take away. If they had been caught, they would have been killed, but they were simply willing to risk everything for what they knew was good, true, and beautiful.

There is so much we can learn from that future pope and his Rhapsodic Theater.

It can be disheartening to be a Catholic in the 21st century. Our faith, and really our culture as a whole, is challenged at every turn. The tenants of our faith, the teachings of the Catholic Church, do not mesh well with today’s secular society. Catholics are essentially strangers in a strange land, sojourners away from their true home.

It is our responsibility to preserve our heritage and pass it on for those who come after us. So, what are a few practical things we can do, as Catholics, to keep our culture alive?

First and foremost — we must pray! We need to develop this habit and we need to form others in the habit as well. Make time to pray together as a family, at least before meals and before bedtime. Designate times for family rosaries and Scripture studies. Pray publicly and invite others to join you. Make Mass and the sacrament of penance a priority in your life.

Second, learn Church history. There are so many good resources out there — books, movies, documentaries. We have so much to be proud of and we need to make sure the next generation of Catholics know that. It is time for us to focus on how blessed we are, and how proud we should be to be Catholic.

Third, learn to view the world through the eyes of faith and teach young people this art form. For example, no matter what students are learning in school — literature, math, science, or history — it can be approached through a Catholic worldview. Even the news of the day can be viewed in the context of Salvation history.

Next, never miss the easy teaching moments, especially on holy days and feast days. Halloween is coming up, and I’ll bet a lot of children are excited about that. But do they know what “All Hallows Eve” means? Make sure they know about All Saints Day and All Souls Day and why we have Halloween in the first place. Don’t let the culture tell them that it is an ancient pagan holiday (they’ll do the same thing with Christmas and Easter if you let them). They are wrong — everything revolves around Christ, and we need to point that out again and again. If these celebrations and traditions were strictly pagan, they would have fallen into the dust pile of oblivion a long time ago.

Finally, take time to explore works by Catholic artists, whether visual arts, theater, music, literature, or movies. Here you will find the highest quality of expressions of mankind’s search for the transcendent. And, just as important, we need Catholics today to use their talents in all these fields to create new works for our contemporary and future generations.

These are just a few quick examples, and there are many more. We must focus more on what is in our control and less on what is out of our control.

We must not become discouraged. If young Karl Wojtyła and his friends were able to subvert a totalitarian regime with little more than righteous defiance and powerful words, think of what we can do in our own time and place today. Albeit on a smaller scale, the Rhapsodic Theater did the same thing that the Catholic monasteries did for Western civilization during the so-called dark ages — namely, keep the light of Christ alive. We are all called to do the same thing no matter in what situation we find ourselves. Even though the world will keep trying to snuff them out, people will always be attracted to goodness, truth, and beauty.