Blog - Latest News
You are here: Home1 / Catechesis & Evangelization2 / May, Mary, and the ’externals’ of faith

A couple of years ago I posted on Facebook that I was looking for one of those “concrete Mary statues that people put in their yards.” I thought a fallen-away Catholic friend might have one they inherited from their grandmother.

Much to my surprise I ended up with one that had been in my family for at least 70 years.

When I asked about the somewhat comical paint job I found out that the statue had stood for a long time near my great-great aunt’s barn and that my grandpa had been encouraged to paint it several times as a child. I took it home, sanded it down and, following in my grandpa’s footsteps, I painted it — this time white.

A couple of days later it was time to do what I had planned all along. I hauled the 40-or-so pound, concrete statue a half mile up two hills to place it at the highest point on my friend’s 60 acre farm. There she stands today, overlooking the Licking River — “Our Lady of Grant’s Lick,” as we call her.  Those of us who hike those trails regularly will often pick wild flowers to crown her with or to lay at her feet. 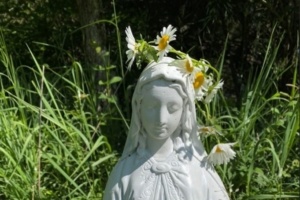 Our Lady of Grant’s Lick

I’ll not bore you with an exposé on the political and ideological pressures that have, for centuries now, sought to force religion out of the public sphere and into the realm of private and preferably internal expression. The fact still remains — public, external displays of religion are increasingly uncomfortable for people today.

In recent decades we have seen this effect on the Church. How many of the Church’s traditions and external expressions have been lost in the last few generations?

I am frequently reminded that “external expression” does not mean “internal adherence.” I am told that, in the past, the Church had great external displays of the faith but that few people truly held the faith interiorly. I’m also told that, back in “the day,” a lot of people had the faith memorized but didn’t really internalize it. Well, nowadays many people still don’t internally believe the faith, and now they don’t have it memorized anymore either.

People are correct when they say that external acts of faith are superficial and useless if they are not accompanied with internal faith of the heart, but with all my heart I believe we, as a Church, acted unwisely when we removed and lost so much of what made the faith tangible. We are physical beings, after all, called to love God with both bodies and soul.

The tangible traditions and expressions — the so-called “smells and bells” — help make the faith come alive and seem more “real.” They give us physical ways to express our spiritual beliefs and our love.

It is an obvious best practice for elementary school teachers to use tangible activities, coloring pages, toys, etc. to help children learn abstract and difficult topics. When the children come around to understanding those things, do we think their understanding is any less “pure” or meaningful because they came to it by way of physical expressions and activities?

Let’s not fool ourselves. We like to pretend otherwise, but adults are basically children that got bigger, so the same principles apply to us. The faith is difficult, especially today. Let’s not be afraid to help ourselves learn it and internalize it with the aid of outward expressions, traditions and activities.

I think the Church is coming back around to this and we are seeing many traditions return. I encourage you to help out with this project.

It’s May — the month of Mary. What a great place to start. Consider planting a Mary Garden this year. Place a statue of Our Lady in a prominent place. Take your family on a hike to pick flowers for Mary.

It may feel awkward at first because, as discussed above, we are conditioned to be uncomfortable with outwards signs of religious belief. But give it a try — not for superstition’s sake, not to earn any special rewards but for the same reason my Grandpa and I painted our Mary statue — because when you believe in and love someone, it’s only natural to want to express it by doing something for them.

Brad Torline is associate director for the Office of Catechesis and Evangelization, Diocese of Covington, Ky.

St. Joseph: patron of a Happy Death
Scroll to top