Wednesday, May 11, 2022 marks 107 years since the passing of Bishop Camillus Paul Maes, the longest-serving Bishop of Covington (1885-1915.) To commemorate this anniversary, St. Mary’s Cathedral Basilica of the Assumption is hosting a temporary exhibit in the Maes Crypt Chapel entitled “Maes: 107 Years.” Drawn from the Cathedral Collection, the exhibit brings together vesture and liturgical objects associated with Bishop Maes.

Born in Belgium on March 13, 1846 in the old Flemish city of Courtrai, Maes was orphaned at age 12 and entered the seminary in 1865. Ordained in Louvain, Belgium on Dec. 19, 1868 and desiring to become a missionary in America, he came to the Diocese of Detroit in 1869 and served there for 16 years before being appointed Bishop of Covington in 1885 by Pope St. Leo XIII.

The centerpiece of the exhibit is a cope from the French province of Porcelette made in 1791 which would have been worn by Bishop Maes for Cathedral liturgies. Made of handwoven silk damask with gilt thread, the cope predates the founding of the diocese by 62 years. While it may have been brought to the United States in the early 19th century, it is possible that it was brought to Covington by Bishop Maes after one of his many trips to Europe where he acquired vestments for the newly expanding Covington diocese. At a time when cloth was expensive, the exquisite craftsmanship and labor involved in making the cope would have set it apart for use at the Cathedral’s most solemn liturgies — liturgies like Christmas, Easter, and Corpus Christi. As part of the Cathedral Collection and given its age, as well as the possibility of predating Bishop Maes, it may have been worn by Bishops Carrell and Toebbe before it was retired because of its delicate condition. A precious miter once used by Covington’s seventh Bishop, Richard H. Ackerman, compliments the cope and helps to show how it was worn in relation to other vesture at a pontifical ceremony.

A crozier used by Bishop Maes is also on view. While the crozier has long been held in the Cathedral Collection, its history was previously unknown until it was clearly identified in a photograph of the cornerstone laying at St. Patrick Church, Maysville, in 1903. In the photograph, Bishop Maes is shown presiding over the ceremony with the same crozier.

Other items on view were retained from the translation of Bishop Maes’ remains from St. Mary’s Cemetery to the Cathedral in 2019. While water had permeated the grave, numerous items survived. These include: a pontifical amethyst ring, the name plate from the top of the coffin, and the casket’s six handlebars with accompanying wood-pole fragments.

Together, items from Bishop Maes’ life and death have been brought together to bring Covington’s saintly bishop back to life for the faithful today.

As bishop, he was a striking figure — tall, finely built, of florid complexion and black curling hair. He spoke seven languages fluently and possessed a perfect command of English, enhanced only by a slight Belgian accent. He loved young people and had a special affection for children — especially orphans.

When he first arrived in Covington, he found the old St. Mary’s Cathedral in a state of disrepair and his growing flock in need of a new house of worship. He began the present Cathedral in April 1894, completing the main struc- ture in 1901 and the façade in 1910. This magnificent and timeless gothic Cathedral Basilica stands as a testament to the vision of a Bishop who wished to give the people of Covington a monument of the love of Christ for souls. In his own words, “indeed, the message of the Cathedral is the message of Christ himself.”

When Camillus Paul Maes died on 11 May 1915, the sound of tolling church bells echoed across every city and town in Northern Kentucky, bidding farewell to the man who gave the people a gothic masterpiece that would speak to them for centuries to come.

The exhibit “Maes: 107 Years” runs May 7–31, 2022 and is on view in the Maes Crypt Chapel at St. Mary’s Cathedral Basilica of the Assumption, Covington. For Cathedral hours, visit covcathedral.com. 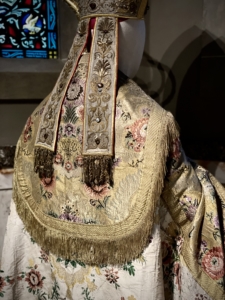 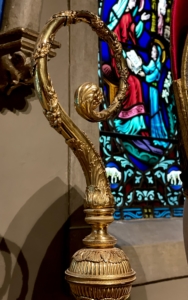