Blog - Latest News
You are here: Home1 / Catechesis & Evangelization2 / Source and Summit Articles3 / Out of shadows and into truth

I enjoyed watching recently an interesting and even somewhat charming British documentary in which Queen Elizabeth II (who even managed a rare joke) handled, examined and talked about the St. Edward Crown, with which she was crowned over sixty-five years ago and which she apparently has not seen since (I suppose she doesn’t keep these things in a dresser drawer), and the newer Imperial State Crown, which she dons on a regular basis to open the British Parliament. She spoke with some knowledge of the history of the great Cullinan “Star of Africa” diamond which adorns the latter crown, and the program featured commentary on the circumstances of its discovery, cutting and placement in the crown (the priceless gem was sent years ago from South Africa to London by regular mail!), as well as a lengthy discussion on the stone’s characteristics, colors, flaws and so forth, which was all news to me and rather beyond anything I know (which is more or less nothing) about diamonds.

Yet, in teaching about the Eucharist, I have often found myself mentioning diamonds — they are proverbial for being (pun intended) multi-faceted, a term which comes to mind when one reads this beautiful quote on the Eucharist from the Second Vatican Council, to be found (n. 1323) in the wonderfully comprehensible and accessible “Catechism of the Catholic Church,” which should have a place in the home of every committed Catholic:

“At the Last Supper, on the night he was betrayed, our Savior instituted the Eucharistic sacrifice of his Body and Blood. This he did in order to perpetuate the sacrifice of the cross throughout the ages until he should come again, and so to entrust to his beloved spouse, the Church, a memorial of his death and resurrection: a sacrament of love, a sign of unity, a bond of charity, a Paschal banquet ‘in which Christ is consumed, the mind is filled with grace, and a pledge of future glory is given to us.’”

Sacrifice, memorial, sacrament, bond, banquet … how wonderfully bright is this shining “source and summit,” as the Council calls it, of the Christian life.

The Catechism with great clarity references the centuries of scriptural and Church teaching on the Presence of Christ in the Eucharist, including that “summary” which was presented in the sixteenth century by the Council of Trent:

It sometimes happens that faithful Catholics encounter people objecting to what we believe about the Real Presence by claiming that the Church’s use of that medieval, philosophical term, “transubstantiation,” as well as the development over the centuries of how the Church has sought to honor that Presence, means that what we believe about the Real Presence is some kind of a medieval innovation or exaggeration remote from what the early Church believed about how Christ is present in the Eucharist. 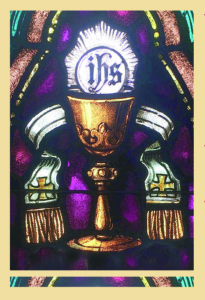 In 1968, in his beautiful yet relatively brief “Credo of the People of God,” and like his successors in many subsequent papal teaching documents, Pope St. Paul VI tried to address that and other modern errors concerning the Eucharist, and perhaps especially concerning adoration of the Eucharist, by describing the use of “transubstantiation” as appropriate while, at the same time, emphasizing that whatever kind of language we may use in describing the change which occurs on the altar, we must always understand that “in the reality itself, independently of our mind, the bread and wine have ceased to exist after the Consecration, so that it is the adorable body and blood of the Lord Jesus that from then on are really before us under the sacramental species of bread and wine, as the Lord willed it, in order to give Himself to us as food and to associate us with the unity of His Mystical Body. … And this existence remains present, after the sacrifice, in the Blessed Sacrament, which is, in the tabernacle, the living heart of each of our churches. And it is our very sweet duty to honor and adore in the blessed Host which our eyes see, the Incarnate Word whom they cannot see, and who, without leaving heaven, is made present before us.”

“Our very sweet duty.” Pope Paul appreciated and loved the Catholic impulse quietly and reverently to express our wonder and gratitude for what happens before us at Mass, and for what — for whom — we receive in holy Communion. And so we have, among many other hopeful things in the life of the Church, and shiningly standing out in a troubled and confused world, the phenomenon of parish programs of Eucharistic adoration, including here in our own diocese. It’s always a great and often a moving pleasure, and a reaffirming one, to see how such expressions of our belief in the Real Presence strike converts to our faith.

Msgr. Ronald Knox (preacher, apologist, Bible translator and mystery writer) was a 20th-century English convert, and in a powerful Corpus Christi homily recalled the epitaph of St. John Cardinal Henry Newman, the great 19th-century convert (himself very frequently cited in the Catechism), “Out of Shadows and Appearances into the Truth”:

“When death brings us into another world, the experience will not be that of one who falls asleep and dreams, but that of one who wakes from a dream into the full light of day. Here, we are so surrounded by the things of sense that we take them for the full reality. Only sometimes we have a glimpse which corrects that wrong perspective. And above all when we see the Blessed Sacrament enthroned we should look up towards that white disc which shines in the monstrance as towards a [crack] through which, just for a moment, the light of the other world shines through.” (“Pastoral and Occasional Sermons,” 304)

Msgr. William Neuhaus is a retired priest in the Diocese of Covington.

The Eucharist and our longing for God

A gift of presence and unifying love
Scroll to top