The liturgical Christmas season is really a beautiful and interesting time of year. While the secular world has the tendency to let go of the joy of the season on Dec. 26 and move on to the next “big” thing, Catholics stay focused on the birth of Christ and the idea of light conquering darkness in our world. We don’t mark the end of Christmas until the celebration of the feast of the Baptism of the Lord — which falls on the Sunday after the feast of the Epiphany (usually the second Sunday of January).

In addition to the Epiphany — a feast we easily connect to Christmas (wise men discover Christ on the path to true knowledge) — there are several other Catholic feast days that fall within the Christmas season. Some of these feasts, such as the feasts of St. Stephen (Dec. 26), St. John the Apostle (Dec. 27), St. Thomas Becket (Dec. 29), and St. Sylvester I (Dec. 31), don’t have much of a connection to Christmas and are often, unfortunately, overlooked. But then there are also the feasts that have a profound connection with the Nativity of Christ — the feast of the Holy Innocents (Dec. 28), the feast of the Holy Family (first Sunday after Christmas) and the Solemnity of Mary, Mother of God (Jan. 1).

The feast of the Holy Innocents, in particular, can seem like a strange if not horrific break from the overall theme of joy that comes with the Christmas season. However, a close reading and further reflection can prove that this story from the Gospel of Matthew, although disturbing, can also be a message of hope.

Herod (the not so great) was king of Judea when Christ was born and he was a cruel dictator. He was absolutely obsessed with power. When he believed his sons became a threat to his reign, he executed them. He also killed his wife, his brother and his sister’s two husbands, just to name a few of his victims. He was an insecure tyrant capable of extreme brutality.

When Herod heard about the magi in his midst looking for “the newborn king of the Jews” he sent for them right away, hoping to learn all he could to protect his throne. He attempted to trick them into telling him exactly where he could find the child but his plan failed and he became furious. He had already proven that he will stop at nothing to keep his power and so he ordered the execution of all male children in the region two years of age and under.

The details of the massacre are for the most part left to our imagination but the devastation of the mothers and fathers led St. Matthew to quote Jeremiah: “A voice was heard in Ramah, sobbing and loud lamentation; Rachel weeping for her children …” (Mt 2:18).

What are we to make of this horrific story of an evil king killing the young boys of Bethlehem in order to preserve and wield his power over the people?

Of course our hearts and minds go first to the innocent little ones and their families. It is natural for us to ask: why couldn’t God just prevent this slaughter? Truthfully, there is no explanation that could satisfy our human craving to understand why the terrors of this life are allowed. Suffering is indeed a mystery and cannot be endured without faith and trust in God.

And what are we to make of Herod? These small passages are perhaps among the most poignant in the New Testament on demonstrating what antichrists and the fruits of their labor look like. This story has repeated itself again and again throughout all history. It is man’s attempt to silence God and eradicate him from the earth. It’s man’s attempt to become God; to decide for himself what is good and what is evil; to believe that he can rule over everything with no consequences. Herod is someone who has walled off his heart to Christ and therefore offers the world the opposite of what Christ offers. To build himself up he must tear others down. What he desires is power and possessions; what he offers is misery and destruction.

Choosing darkness over light will always lead to death, if not for us, than for someone else, perhaps at another place, another time. The feast of the Holy Innocents reminds us that the coming of Christ into the world is a lifeline from the darkness of evil that lies in the hearts of those who selfishly choose power and ultimately death over the good, the true and the beautiful. Christ is our hope.

Suffering, persecution and martyrdom come with the territory of following Jesus Christ. From the moment of his birth the Lord shook up the world. He is a king, but not in the way the world expected it. Kingship is not about control and comfort. It is through Jesus’ suffering, humiliation and death on a cross that salvation was won. His death won life – eternal life for us. And his blood which was shed for our sake obtained pardon and reconciliation with our heavenly Father. There is no crown without the cross. The only true consolation we can find for the tragedies of life is the resurrection. We believe that, in the end, God will right every wrong. 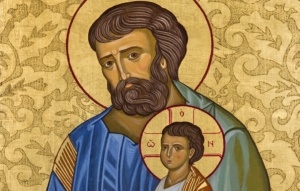 There is quite a contrast between King Herod and Joseph (a descendant of a true king of Israel — David). Herod only cares about himself and his kingly power while Joseph only cares about doing God’s will. Joseph wishes to serve God and his family while Herod resorts to anything that will benefit his situation, including slaughter. St. Joseph is the model of someone who is decisive and acts wisely. He was the protector of his family and continues to be the great protector of the Church.

After the adoration of the magi, an angel appears to Joseph in a dream with a startling message: “Go to Egypt. Herod wants to destroy the child.” Joseph obeys immediately. He rises from sleep and, like Joseph in the Old Testament, finds refuge in Egypt. It’s striking that both the Old Testament Joseph (son of Israel) and the New Testament Joseph (son of David) had dreams from God that ultimately led them to Egypt. In fact, in the Old Testament it was in Egypt that the nation of Israel — the Israelites — finally came into being (see the beginning of the book of Exodus). Both Josephs were able to save their family in Egypt. However, that is not where they belonged. Egypt was a powerful empire; it represented the world and what it offers through slavery, politics and wealth. It was not the Promised Land, or the Kingdom of God.

Like Israel, Jesus too, will return from Egypt. Jesus’ return is the fulfillment of prophet Hosea 11:1: “Out of Egypt I called my son.” Jesus relives Israel’s experiences. Jesus is Son of God in a deeper sense than Israel ever was. Through Jesus, God the Father will bring the old covenant to perfection.

This Advent, wait with Mary for the coming of Christ

A reflection for Catholic Schools Week 2021
Scroll to top