First St. Mary’s church left an enduring legacy to the people of Covington

You are here: Home1 / Speaking for Centuries2 / First St. Mary’s church left an enduring legacy to the people of Covin...
PreviousNext
1234 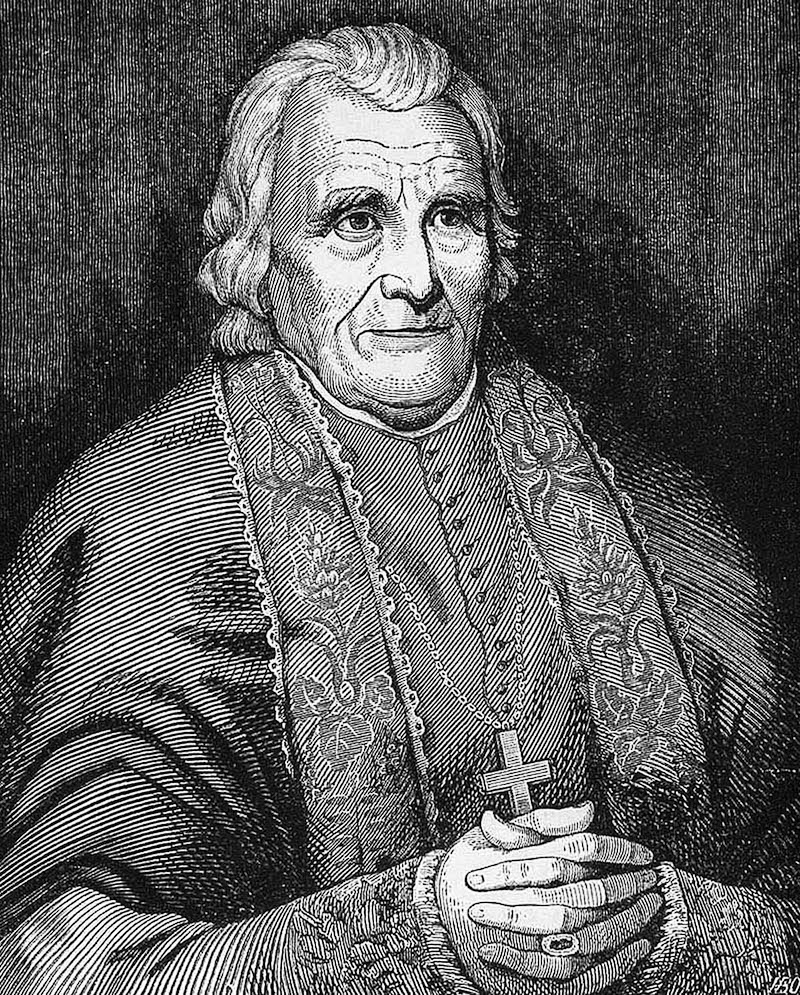 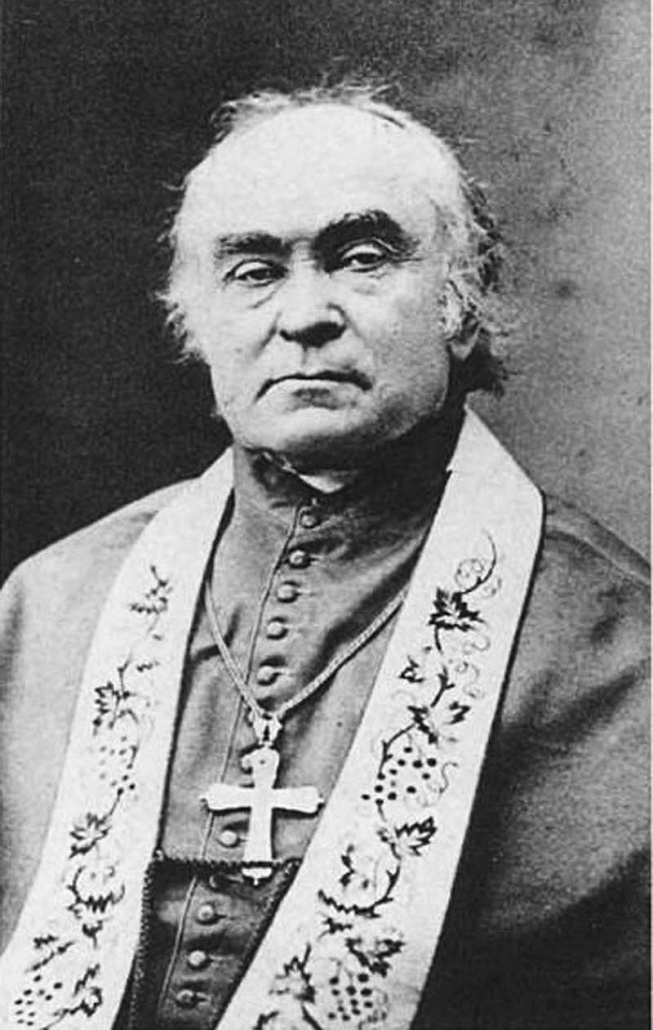 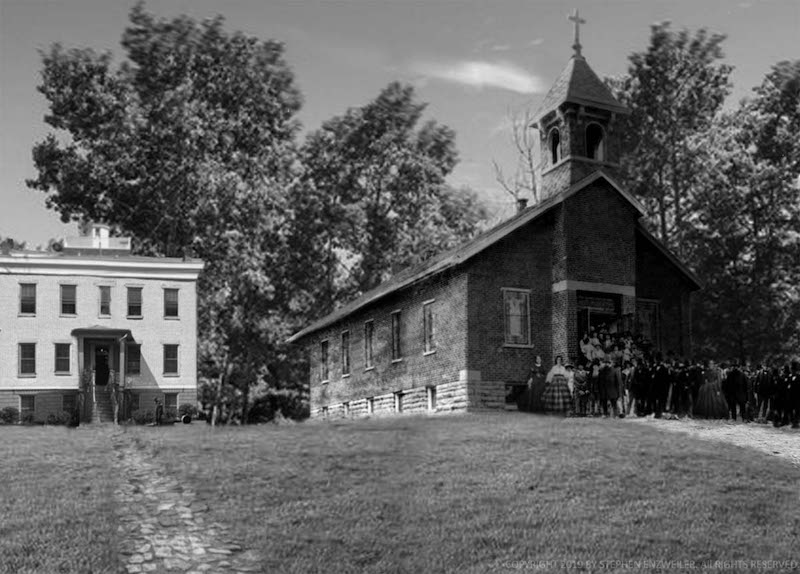 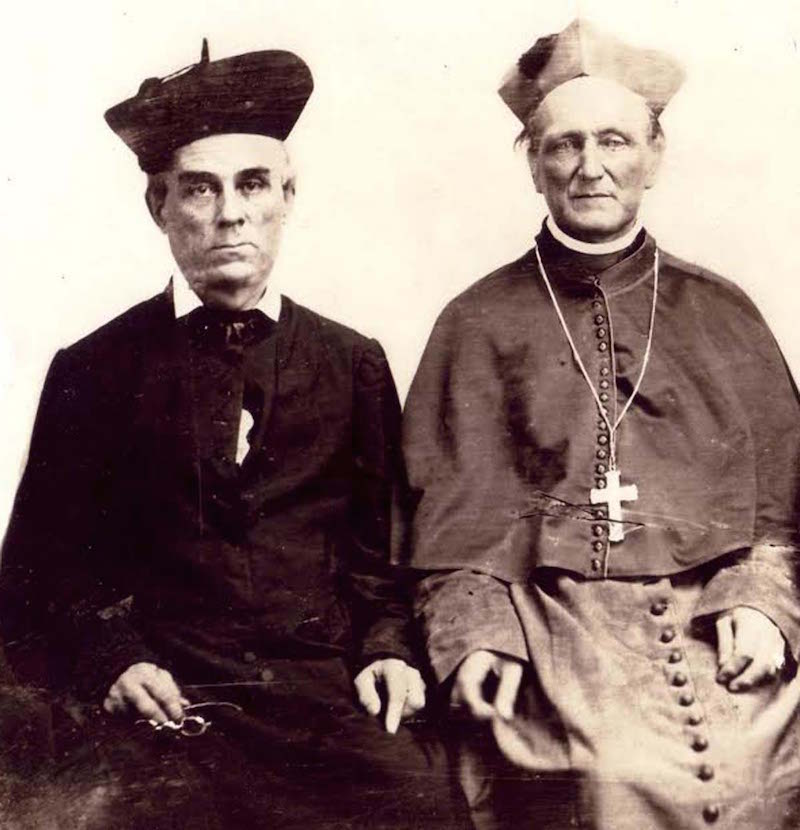 On the morning of Sunday, Sept. 21, 1834, two men boarded a ferry waiting on the banks of the Ohio River at Cincinnati and set off across the water toward the city of Covington. One of the men, a Dominican friar, in flowing white, named Rev. Stephen H. Montgomery, had been across to Covington many times that summer checking the progress of the construction of a mission church thereon a small tract of land. The church had been the initiative of the man Montgomery was travelling with, the recently installed Second Bishop of Cincinnati, the Right Rev. John Baptist Purcell. It was to be a joyous day for both men as well as for the people of Covington, and it would be remembered as the day St. Mary’s Church — the first Catholic church ever erected in Northern Kentucky — was dedicated.

The effort to build it had begun more than a year before, when a group of Irish and German citizens met and formed a small congregation of catholic faithful. It was the first such congregation in Covington’s history, but they had no church or priest to minister to them. In those years, Northern Kentucky belonged to the Diocese of Bardstown, led by its capable Bishop, the Rt. Rev. Benedict Joseph Flaget. Bishop Flaget simply had no missionary priests available to send to the Northern Kentucky city, but the close proximity of Cincinnati with its much larger population forced him to ask Bishop Purcell for help.

Covington then was still a small, secluded community scattered along the banks of the Ohio with less than 800 residents. A grid of dirt streets cut through a tortured landscape still thick with stands of walnut, oak and hickory, and the little church toward which they were headed was still considered to be in one of the more isolated areas of town. As the ferry landed and discharged its passengers, Bishop Purcell and Father Montgomery set off on horseback for the corner of Fifth and Washington Streets only a short distance away.

The land on which the church had been built was purchased the year before by Greenbury Ridgeley Stringer, a devout Roman Catholic and wealthy notary from New Orleans. On it there sat a fine Greek Revival home which had been painted white and was known widely in Covington as “The White Mansion.” Mr. Stringer, who had known Bishop Flaget for some years, immediately offered the land to him as a location for a new church in Northern Kentucky. Bishop Flaget, with few missionary priests to spare and no money, instead offered the task of building a missionary presence there to Bishop Purcell. Bishop Purcell wasted no time.

By the summer of 1834, the church was finished. It was a simple but handsome structure situated on a low hill and rising above Fifth Street like a monument. It was small, just 30 by 50 feet, and held about a hundred people. A stone walk led up the hill from the street to the church and its wooden steps and single door, and above rose a modest steeple with a single bell sounded by use of a pull rope. The interior was a single room with a sanctuary and main altar at the far end separated by a communion rail. Behind the sanctuary was the sacristy, used for vesting and storage and later as a schoolroom for the instruction of boys and girls. Later that day, before a crowd of several hundred people, Bishop Purcell, assisted by Father Montgomery, celebrated the first solemn high Mass there and officially dedicated it under the patronage of the Virgin Mary, naming it “St. Mary’s Church” at the request of Bishop Flaget.

In its first few years, the church was known simply as “St. Mary’s Mission,” and it served a congregation of both English-speaking and German-speaking Catholics, most of them immigrants. For the first three years of its existence, it had no resident priest. “One of the Reverend clergy of the Cathedral of Cincinnati,” noted the Catholic Telegraph, “celebrated ‘Holy Mass’ on two Sundays (second and fourth) of every month.” The “Reverend clergy” mentioned in the article was Father Stephen Montgomery. Later, a Rev. Ferdinand Kühr, a missionary of the Sacred Congregation of the Propagation of the Faith, was assigned to minister to the German-speaking parishioners.

But by 1837, as Covington’s population continued to swell, Bishop Purcell realized the congregation needed a permanent resident priest and re-assigned Father Montgomery as St. Mary’s first permanent pastor. Father Montgomery took up residence in the White Mansion, and to help defray some of the expenses of the parish, rented a portion of its ground floor to the Rev. Dr. William Orr, Covington’s first Presbyterian minister and preacher, as a classroom for his Covington Female Academy for young women. The White Mansion would ultimately become the residence of each succeeding pastor of St. Mary’s as well as the temporary residence of the first Bishop of Covington in 1853.

By 1838, the number of German-speaking families at St. Mary’s had increased to nearly 40, which was enough to warrant the creation of a separate parish. With the permission of Bishop Flaget, a new congregation was organized for the German-speaking population of the city under the direction of Father Kühr. The German priest quickly went to work, first renting a hall in the Old National Hotel Building on Scott Street in which to have Mass. Then in the spring of 1842, he bought a piece of property a block from St. Mary’s on Sixth Street upon which the new German church was erected. It was dedicated on Oct. 10, 1842 as Mutter Gottes Gemeinde (Mother of God Parish). Thereafter, Mother of God Church principally served the German-speaking population of Covington and continues to be known today as “the German church.”

By 1845, Father Montgomery was nearing 60. After a life as a frontier missionary, then building and pastoring St. Mary’s for nearly a decade, his time at the little church on the hill was at an end. He may have been looking forward to spending his last years among his community of brother Dominicans, or he may have gone back to missionary work in the rural reaches of Kentucky. But nothing of his life is known after he left St. Mary’s. That same year, Pastor Orr’s Academy that had occupied classrooms in the White Mansion for eight years moved to Sanford Street to a Greek Revival property now called The Rugby. After Father Montgomery’s departure, Covington resurveyed portions of the city and eliminated Washington Street from Sixth Street to the river. A small street was cut in front of St. Mary’s and named Montgomery Street in honor of Father Montgomery.

Pastors would follow in the coming years, each contributing in his own way to the growth and progress of the congregation. There would be the Rev. Theodore Hymann who served until 1849. Then there was the energetic Rev. John Baptiste Lamy, who became the first Bishop of Santa Fe, New Mexico in 1851. The Very Rev. Thomas R. Butler followed, but he soon realized the small size of St. Mary’s was insufficient to accommodate the needs of its growing faithful. In response, he began making plans to build a new, larger St. Mary’s on property that had been purchased on the north side of Eighth Street. The materials were ordered and construction was already underway, when word came that Pope Pius IX had established a new diocese with its Episcopal See located in the city of Covington. Construction stopped, and with no other land available, it became the location of Covington’s first Cathedral in 1853. Because the property had been originally intended to replace the old St. Mary’s church, the new cathedral was dedicated as “St. Mary’s Cathedral.”

But the story of the little church on the hill doesn’t end there. For a time in the late 1850s, the old St. Mary’s church building was used as a school, and after a few years torn down to make way for townhouses. As the nineteenth century came to a close, and as St. Mary’s Cathedral fell into disrepair and Covington’s population continued to grow, a newer and more beautiful, French gothic cathedral was conceived by the third Bishop of Covington, the Rt. Rev. Camillus Paul Maes. This third edifice, dedicated in 1901, carried on both the name and legacy of St. Mary’s into a new century and beyond.

Today, the legacy of the little church on the hill that Bishop Purcell and Father Montgomery built for the people of Covington is still very much alive. The third St. Mary’s — now St. Mary’s Cathedral Basilica of the Assumption at Twelfth and Madison in Seminary Square, carries on the original name and mission of ministry to the local community. Today, the gothic masterpiece built by Bishop Maes has become a historic landmark that is sought out and visited by people from around the world and is still known in northern Kentucky as “the Irish church.”

St. Mary’s will celebrate its bicentennial in 2034.

Stephen Enzweiler is a writer, author and Cathedral Historian at Covington’s Cathedral Basilica of the Assumption. This article first appeared in the Northern Kentucky Tribune for its “Our Rich History” series.

Part I: From the beginning, Camillus P. Maes seemed destined to become Covington’s...
Scroll to top